What does it take to be a winner? To born with the skill? What must a sportsperson have to reach on top of his/her game?

This book talks about some of the traits sportspersons have that makes them a legend. Legends do not born in a day. It took years and a lot of sweat and blood on the court/field to reach to the top and the tough part is to maintain the spot.

Saina Nehwal is a face of badminton in India where the game of Cricket is a God. A country no other sport has such kind exposure and admiration in the fans. She gives badminton a new height and the role model to the coming generations. She is a queen of her game. An interesting revelation of her personality traits that make her a legend. A career started at an early age of nine and coached under four mentors. Driven by willpower and never-say-die attitude, inspired by her parents and coaches, Saina is a warrior who rises after every fall.

The book also talks about her relationship with her mentors and how important the role they played in her career. She is a brilliant student who listens to every advice of her mentor and works on them. Her biggest critic and first coach is her mother, a badminton player herself.

The book is a learning experience. It is helpful and informative for the professionals in every field and not only for a sportsperson. The author breakdown the traits to make it more simple to understand and coupled them with the example of successful people and how they made it big. Learn how Saina made it to the top, practice it in your life and profession and climb the ladder of success.

Jatin Gupta is the Head of Business Operations at a leading sports-related company. He is a management professional with over fourteen years of work experience in consumer product, consulting, financial services and sports industry. He has handled various leadership positions with different organizations like Deloitte and Invesco. A traveler at heart, Jatin is also a voracious reader who likes to indulge in the world of biographies and fiction often. This is his first attempt at non-fiction where he has tried to share a few of his learning’s from the professional world.

‘Winning like Sachin’ unravels the attributes that make Sachin what he is – an inspiration for generations. He is looked upon as a role model. A man who achieved a lot more than professional success. He is an inspiration for not only the new coming cricketers but the one who wants to achieve big in his life. His ideas and principles never let him give up after failures but give him the strength to get up again. His never give up spirit and dedication towards the sport make him one of the greatest cricketers of the world.

He was a team player and always worked in the interest of the team, that makes him a great leader who put his team before himself. Such qualities and many more make the person he is – the legend. This book is written aiming to break-down some of the qualities from the life of a man who rose to become God of cricket in India.

Sachin Tendulkar’s life is a great example to learn what a simple man can do with determination and dedication to his passion. He devoted the greater part of his life to cricket and worked only what is in favor of the game and his team. His team was always above his centuries, his personal records. He played for the team and never to make a personal record.

The book is a great initiative to learn from his life and also a good book for his fans and followers. His life is an inspiration for everyone. His commitment to excellence yielded success. An institution himself there is a lot one can learn from his life.

In a career spanning nineteen years, Devendra Prabhudesai has worked across sectors and handled a wide range of responsibilities – from working with the police to rehabilitate victims of crime, to executing some of the biggest cricketing events organized in India in recent times. An author, screenwriter and anchor, he was also the Manager for Media Relations and Corporate Affairs at the Board of Control for Cricket in India (BCCI) from January 2008 to July 2015.

Devendra lives in Mumbai with his wife, Anuradha, and children, Abhimanyu and Ira.

Nautanki Diaries is a journey of dream and endurance author dreamed much before he actually had undertaken and hit the road in 2010. Inspired by his teacher who had gone on a similar yatra years ago. His experience helped him to stay put and push his limits to the edge of breaking down.

He explored his country from journey begins from Bengaluru to New Delhi to reach in time for the 2010 Commonwealth Games. The author takes you on a journey of twenty-two days on a cycle describing the India he found reckon with conversations he has along the way.

Nautanki Diaries is a love story of a man and his ‘doodhwalla’ bicycle. Nautanki has her own tantrum and she is the best travel partner and a companion one would think of. She worthy to be trusted and takes good care of her rider not creating much ruckus when treated with love and care; regular service and oiling of her parts.

The time I started the book, I fell in love with Nautanki. She looks like the best companion Dominic can ever think he had. She is his travel partner and a girl-friend he trusted with his life.

The writing is at its best. One could not think of a better-written travelogue than this one. This is one of the best-written non-fiction travel diaries and I will like to read it again. It is a well-crafted smooth read with a quirky humor and candor. I like every inch of it and recommend to every reader wants to read something refreshingly new.

Dominic Franks graduated from Bangalore Medical College. His passion for sports led him to give up his career in medicine and join a premier sports channel. In September 2010, he decided to go on a cross-country bicycle journey from Bengaluru to New Delhi to witness the Commonwealth Games. It’s Not About the Cycle – winner of Best Adventure Film at the 2017 Toronto Beaches Film Festival – stars Nautanki, his bicycle, the central character of Nautanki Diaries.

Currently, he is working on producing his first documentary feature about human-animal relationships.

When not working to travel, or traveling on works, Franks holes up in Bengaluru where he lives, laughs and loves.

Children, Children and YA, contemporary, Sports 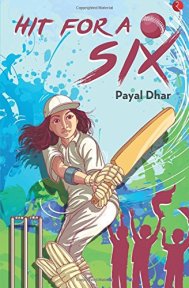 Rewind your life and relive your teenage days with Laila. She is a great cricket fan and lives on her own terms. She is bold and brave and always there for her friends. She was badly shaken when the cricketer she idolizes admits to match-fixing. She was happy that her best-friend is back in town and school reopens for the start of new session.

Hit for a Six is a story of a thirteen-year-old girl Laila. Her love for cricket, school, friendship and her rendezvous is what the story is all about. The story has a little mystery of an old Mr. Mashall’s house dated back to the nineteenth century. The house has a historical importance and holding many secrets and rumored as a haunted house. The house has been abandoned for many years and Laila’s secret hideout till new occupants of the house shifted in it.

This book is not for every reader. If someone has just started reading books or you want to introduce your teenage kid or younger brother/sisters to books, this could be a good starter. The plot is good and the storytelling could have been better. It is a short book and won’t take much time to finish. I completed it in one go in around three hours. The mature or middle age readers or someone who is into books from ages would not find the pleasure of reading. The book is for teenage or young and school going readers.

What turn Laila’s life takes after losing her secret hideout in the hands of new occupants who remained private? What happens with her love for her favorite sport? Who are the anonymous benefactors who have sponsored the renovation of Laila’s school? Find it out in Hit for a Six by Payal Dhar

Payal Dhar has been making up stories all her life. Sometimes she has got into trouble for them, but sometimes they have been published as novels and short stories, mostly for young people. She’s also a freelance editor and writer and writes on computer, technology, books, reading, games, travel and anything else that catches her interest. When nobody’s looking, she either has her nose in a book, is surfing the internet, or battling evil in a computer game.

Visit Writeside.net to find out more about Payal’s work and play.

Gandhi, the man who created history. The greatest Indian icon and flag bearer of the Indian national movement of freedom. The world has known him as a man who forced British Raj with a weapon of non-violence to leave the country was new to the world. His principles are still alive and followed around the world. Many foundations have been working in this area of spreading his messages of non-violence to teach the people of the united world to live in peace and harmony on our shared planet.

Founder/Director of The Gandhi Experiment

Mahatma on the Pitch is a book shows a different side of the Mohandas Karamchand Gandhi. The game of cricket is a religion in India. Can anyone think that Gandhi had any relationship with cricket? The game ruling the hearts of the twenty-first-century India. Did Gandhi or his ideas make any impact on the game at the high tide of the national movement? The book tries to find the answers to these quirky questions.

Why should you read this book? The subject is not new. You will find hundreds of books written on Gandhi by best biographers around the world. This book tries to explore a different side of a man whose connection with cricket seems as remote as Gandhi’s tryst with cricket. It is hard to cross in mind of any relationship between the two. The author is one of that curious mind tried to find the answer to the same. Read to know more about the relation between cricket and the Gandhi. It is one of its kinds you do not get to read every day.

Kausik Bandyopadhyay teaches History at West Bengal State University, Barasat, Kolkata. Formerly a fellow of the International Olympic Museum, Lausanne (2010), and the Maulana Abul Kalam Azad Institute of Asian Studies, Kolkata (2006-2009 and 2013-2015), he is also the Editor of Soccer and Society.

Bandyopadhyay has authored and edited several books. His most recent works include Sport, Culture and Nation (2012), Perspective from Indian Football and South Asian Cricket (2015); Bangladesh Playing: Sport, Culture, Nation (2012); and Scoring Off the Field: Football Culture in Bengal, 1911-80 (2011).

Here is a book on Gandhian Principles The Gandhi Experiment