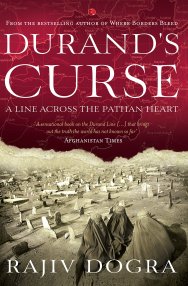 Durand’s Curse as the name suggest is a book on the history of Afghanistan. The tale comes from the heartland of Pathans and tells a riveting story of a line drawn across the Pathan heart. The land that painted blood and witnessed many wars.

Durand line is the line dividing Afghanistan and Pakistan drawn more than a century ago. On the morning of 12 November 1893, ‘the strongest man from Europe’, the then foreign secretary of India and ‘Iron Amir of Afghanistan’, a cruel ruler wrote history. It was to be believed that British officer Sir Mortimer Durand fooled Afghan Amir Abdur Rahman or he believed British too much that he gifted away much of southern Afghanistan to the British Empire, he was finding tiresome.

Rajiv Dogra, bestselling author of Where Borders Bleed, written on India-Pakistan relationships brings you an untold story of the Durand line long buried in a fascinating book telling the truth to the world has not known so far. The lucidly written book is a result of deep research. The book is not only a good read for the readers of history but also for the students. It is a detailed account of the land. I appreciate the efforts; the author has made to bring such a comprehensive book for the readers.

The book accounts the life, trouble, wars, tragedies and injustice on the face of the people and the country that give way to the Afghan anger to fight for the land belonged to them and was taken away forcibly. Read to know the history of misfortunes of Afghanistan and the cursed line drawn on sand.

Rajiv Dogra is a writer, television commentator and artist. A career foreign service officer, he was India’s Ambassador to Italy and Romania, the permanent representative to the United Nations Agencies in Rome and the last Consul General in Karachi.

An active public speaker, Rajiv Dogra is one of India’s foremost commentators on foreign policy and strategic affairs and is noted for his considered and assertive views. He is the bestselling author of Where Borders Bleed, regarded as one of the most authoritative books on India-Pakistan relations.