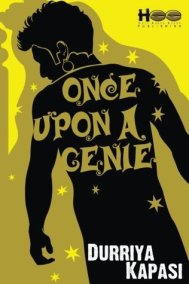 Have you heard the stories of genie? Well, you definitely watched Aladdin. The boy who loved Princess Jasmine and found a genie in a lamp. This genie did not come out of a lamp but from a bottle in which he was trapped by a witch who happened to be the grandmother of Daisy, the protagonist.

Once upon a genie is a story of a young girl Daisy who lost her grandmother and had no one in the world to be called of her own. After she died, Daisy finds out about a treasure box and a bottle inside it. She opened the bottle and a handsome genie came out of it. Khalil Muwahid, the genie gave her three wishes in gratitude of freeing her. The sooner she asks, the sooner he can go back to his land of jinn. She got terrified seeing him at first but gradually there was a strong connection between them, the bond of love.

The story doesn’t end here. Daisy’s best friend, Darren fell for her and suppressed his love seeing Daisy happy with the genie. The Jinn world amended their law and genie can live with Daisy forever only if she will not ask for the third wish. Who will she choose? Does she ask for the third wish?

The first thing crossed my mind after finishing the book is I want that genie. I believe in magic and love everything magical. Books are my that magical window through which I travel the unknown, unseen world.

A good fiction is that makes you believe the unbelievable. The book lived to my expectations and I absolutely fall in love with the story. The beautifully made plot and the storyline. It is an unusual love story of a girl and a genie. Love is the strongest emotion and out of the ordinary pair of this story proves it. Read it to travel the magical world and feel the magic of love.

Durriya Kapasi was born and brought up in the East African country, Tanzania, while her ancestors were from Gujarat, India. She began writing her first book with the pen name Durriya Zaheer on an online storytelling community in 2014. The first story received reasonable appraisal and received nearly million reads online.

Durriya serves as a Creative Writing teacher at a local primary school, an editor of a reputed local magazine and sub-editor at online news site UdaipurTimes.com. She also contributes as a Wattpad Community Ambassador.

Durriya lives in Udaipur Rajasthan. Beside her utmost passion for English Literature and reading, she loves traveling and cooking. She is a Cancer survivor. Know more about her at durriyakapasi.com

You can reach to her at todurriya@gmail.com

‘I received a copy from Author in exchange for an honest and unbiased review.’

8 thoughts on “Once Upon a Genie”