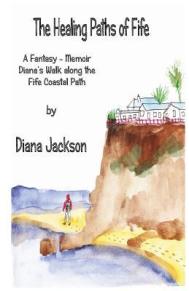 ‘The Healing Paths of Fife’ is a memoir of Diana Jackson. A travel path full of fantasy encounters. She met significant strangers while walking the coastal paths of Fife and had equally special and strange experiences and adventures. Some are spooky and some are pleasant. Every new day of Diana’s life is full of exciting adventures and with every day she understands what the time demands her to do. The Path proved to be a healing and self-discovering.

Diana Jackson was happily redundant from her lifelong teaching job. She has to relocate with her husband whose job is transferred to Fife from Bedfordshire. She met some interesting and strange people while walking and discovering her new place and settling down in her new life. She made new friends which she met by fate and these people help in discovering her path in Fife and in her life. She was fortunate to discover a sense of peace.

After relocation, she had plenty of time in her hand and need to think which path she wants to travel next. Her experience of self-discovery and finding her calling might help you with some of the challenges you face in your life and finding peace like Diana.

The book is divided into two parts. The first part tells the story of her relocation and settling down in her new life and traveling the healing and rejuvenating paths of Fife. The second path tells the beginning of the new life of Diana after she and her husband threw herself in the community life of Fife.

The story is a memoir with elements of fantasy. The book is a travel diary and a true account of Diana’s life after relocating and settling down in her new life with her husband in Fife.

Visit the beautiful and mesmerizing coastal paths of Fife with Diana.

Diana Jackson from Bedfordshire relocated to Fife, Scotland with her husband. Her aim for 2016 has been to settle into their new life. In 2017, she is back writing again with her new book ‘The healing Paths of Fife – A Fantasy memoir. Other works of Diana – The Riduna Series, historical fiction set in the Victorian era through to the early 20th century. ‘Murder, Now and Then,’ was inspired by an unsolved murder back in 1919 in the heart of Mid Bedfordshire. Diana has also compiled a memoir of a Norman Campbell ‘The Life and Demise of Norman Campbell’.

You can reach her to diana@dianamaryjackson.co.uk

‘I received a copy from Author in exchange for an honest and unbiased review.’

9 thoughts on “The healing Paths of Fife”