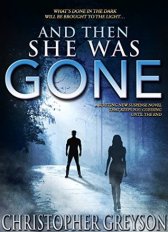 Mrs. Stacy Shaw has been disappeared from Thursday night after office. She is the last one who left the office that night. The last person who saw her is Betty Robinson; Betty’s husband; Stacy’s boss Leland Chambers, whom she argued that evening and Jeremy; one of the ground workers from office. She has blond hairs, height 5’2”, and aged twenty six, married to Michael Shaw for seven years.

One suspect Jay Martin has arrested in charge of using Disappeared woman’s ATM card, he accepted the charges but denied anything to do with Mrs. Stacy’s disappearance. Police is sure Mr. Martin is behind the lady’s disappearance. Case Closed.

Jack Stratton will be joining the army in few months and planned to become a detective in Police department after serving in army. He accidentally bumped into detective Clark who is a friend of his father, one who adopted him and is a math teacher.

The story marveled in every respect and author left no stone unturned to make it a masterpiece. The twists, the suspense, the turn of events and the way they turned. It is not a serious suspense thriller or a wild chase of suspect in every direction possible. It is a story which has its own pauses and run time. It’s is like a smooth walk on a bumpy road. It’s enthralling, humorous, and blood-tingling.