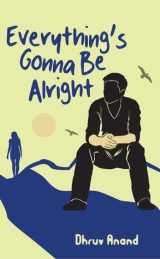 Everything is gonna be alright is written on the theme of all’s well, ends well. The story of a dream, compromise, love.

Akhil Anand wants to be a chef and started learning culinary art from his mother at an early age while helping her in daily meals. He wanted to pursue hotel management and dreamed to open his own restaurant some day but his father did not think it is a great idea and forced him to do engineering. Initially, he had no inclination towards engineering but as if he cannot oppose his father he went on to do and compromised his dream for the sake of his father’s dream to saw him stable. Then story revolves around hostel, college and canteen and occasionally home. He made some good friends Vrishika – his love, Akira – the girl he bumped into on first day of college, Rahul – his roommate and Nagpal – his classmate. Soon his father realized his love for his dream but it’s already too late.

Story of a boy who unwittingly fall in to engineering which sounds victim of choices, the choice made by his father. The story picturesque college life of a boy with a kind heart, who gets in to trouble while helping others. Although it is a debut novel of author but could have been better.